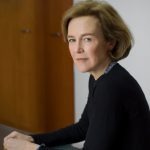 In The Beneficiary, A warmly felt tale of an American family’s fortunes, journalist Janny Scott excavates the rarefied world that shaped her charming, unknowable father, Robert Montgomery Scott, and provides an incisive look at the weight of inheritance, the tenacity of addiction, and the power of buried secrets.

Scott was a reporter for The New York Times from 1994 to 2008 and was a member of the Times reporting team that won the 2000 Pulitzer Prize for national reporting for the series ‘How Race is Lived in America.’
Constance Laibe Hays, a New York Times reporter and the author of The Real Thing: Truth and Power at the Coca-Cola Company, considered the Nantucket Atheneum one of her favorite places in the world. In 2005, Mrs. Hays died of cancer and a lecture in her honor was established to support the work of both new and established writers.
«
Prev
1
/
1
Next
»